40 years of kids and kids-at-heart hitting a white plastic ball with a yellow plastic bat will be celebrated July 20-21 in Midlothian, IL.  From Mishawaka, to Skokie, and now to Midlothian, the World Wiffle® Ball Championship’s storied and quirky history will be on full display.

As registration winds down, we are extremely excited that some of the World’s best from today will be joined by some of the best from yesteryear.  The return of hall-of-famers and legendary teams from the last four decades are certain to make for an unforgettable weekend.  Sign up at worldwiffleball.org/entry by June 30 to join them, and currently teams from 11 states (IL, IN, MI, OH, MO, IA, MN, PA, KS, FL, CA) at taking a run at a World Championship.

Not only will you get to turn back the clock for a weekend, but you also will help raise money for a worthy cause.  Proceeds from the tournament and the Home Run Derby will benefit South Suburban Humane Society in Chicago Heights, IL.

As a reminder, all teams will play four games on Saturday, July 20, with a chance to qualify for the single-elimination tournament on Sunday, July 21.  Teams that go 4-0 or 3-1 on Saturday will automatically advance.  A 2-2 tournament (with games beginning in extra-innings) will then take place after pool play for at least one 2-2 team (and maybe more depending on the number of qualifiers) to advance to Sunday.

The 2018 WWBC saw the return of the Home Run Derby, with Dan Lowe (Loweriders) taking the title of Plastic King of Swing after a captivating Final Four.  This year, we’re upping the ante and giving you a chance to not only win the title, but also take home half of the Derby entry fees.  Throughout the morning and early afternoon, for $5, all players will have the opportunity to be one of four qualifiers that will square off in a head-to-head tournament to crown the new Plastic King of Swing.

Be sure to follow us on Facebook and Twitter (@WorldWiffleball) for additional updates leading up to the tournament.  The schedule will be released shortly after the June 30 registration deadline, both on social media and by email.

Now that some of the tournament details are taken care of, let’s shift gears and share some stories from WWBC founder, Jim Bottorff, about a group of guys that embody what this tournament has been all about for the last 40 years.

The Legend of The Chuds

In the 40-year history of the World Wiffle® Ball Championship, many players and many teams have become legendary for simply understanding that playing a child’s game for an entire weekend is, well –– preposterous.

But perhaps no team has embodied the spirit of this sometimes nonsensical pursuit like the wiffleball team that came out of Los Angeles a quarter of a century ago.

Ostensibly a group of young businessmen and their friends from the coastal regions of Los Angeles County, the Chuds showed up in Mishawaka, Indiana, home of the world’s oldest and largest wiffleball tournament, sometime in the early 1990s.

Now this is where I have to come clean and admit that some of this story is based on hearsay. But this is what I know for sure:

1. The Chuds were a group of guys from LA, who for years flew to Chicago and then the east coast for a week or two –– to golf, take in major league baseball games within driving distance, and eventually, play in the World Wiffleball Championship in between.

2. The number of players grew over the years to 15 Chuds, or three teams.

3. They were accompanied by someone’s sister nearly every year, who seemed to act as “den mother” to the crew.

4. At least two of the guys were pillars of their community.

6. One of the teams usually made the finals on Sunday. The others showed up to root them on.

7. They stayed at the austere, now-defunct Mishawaka Inn.

8. They drank a lot of alcoholic beverages.

9. They wore expensive Cubs knockoff jerseys, repurposed to read “Chuds” on the front.

In addition, while staying at the Mishawaka Inn one year, they befriended a wiffleball team of Missouri teenagers, brought to Northern Indiana by their mom. Taking the boys under their wing, the Chuds showed them some of the hijinks that got them thrown out of the Inn’s outdoor pool. In subsequent years, the young boys had no desire to stay in better lodging, always booking their stay at the Mishawaka Inn adjacent to the Chuds. Eventually, their own team changed its name to the “Baby Chuds.” (The Mishawaka Inn must have seen the Chuds coming every year, evidenced by the photo below. And no, this is NOT a Photoshop job.) 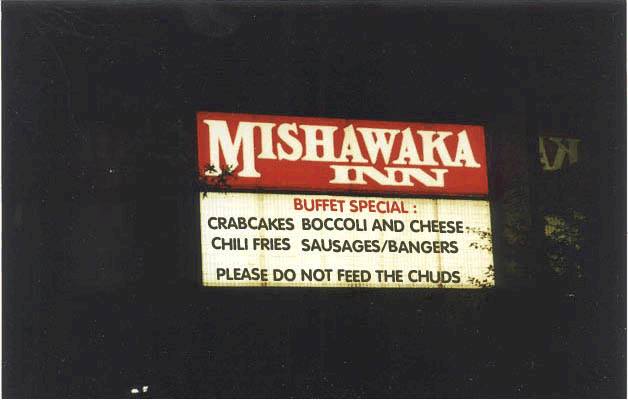 The Chuds also knew how to make their exit. Some say that it happened every year, others say only once, but after their last team was eliminated, they developed a habit of stripping off their clothes, running around Baker Park in various states of undress, and then loading up their van and shooting the moon at their fellow wifflers and fans as they careened out of the venue.

As documented on the tournament’s official history web page under 1998: “Controversy arises for the first time in the history of the tournament when a team is caught loading its bats. Fans show up with signs on Sunday, which read, “No hits, no runs, no cork,” “Cork, the other white meat” and “It’s only 100 feet, for god’s sake!” The “fans” in question were most certainly the Chuds.

Finally, I believe in their last year, possibly 2001, they showed up with a rather fetching young lady in tow, wearing a Chuds jersey and ready to play. The name on the back of her jersey was “Faye.” Apparently Faye had waited on the guys at a restaurant on an LA beach the night before they departed LAX. Because she was fascinated with the outrageousness of the baseball/golf/wiffleball nature of the Chuds annual odyssey, they drunkenly invited her to join them on the trip. She promptly quit her job; they bought her a jersey, and she became an immediate traveling member of the most exclusive sports fraternity west of the Mississippi.

So there it is, a wiffleball tale for the ages. But wait! I am now hearing rumors of a Chuds reformation in 2019. Will it happen? Could it happen? If it does, we can finally straighten out the details of the stories above, make them right, maybe embellish them even more, and hear even better tales that were never told.

And who knows, maybe the Chuds can finally grab a World Wiffle® Ball Championship, the holy grail that has eluded them all of these years.